skip to main | skip to sidebar
Living a simple and laid-back life in the city! 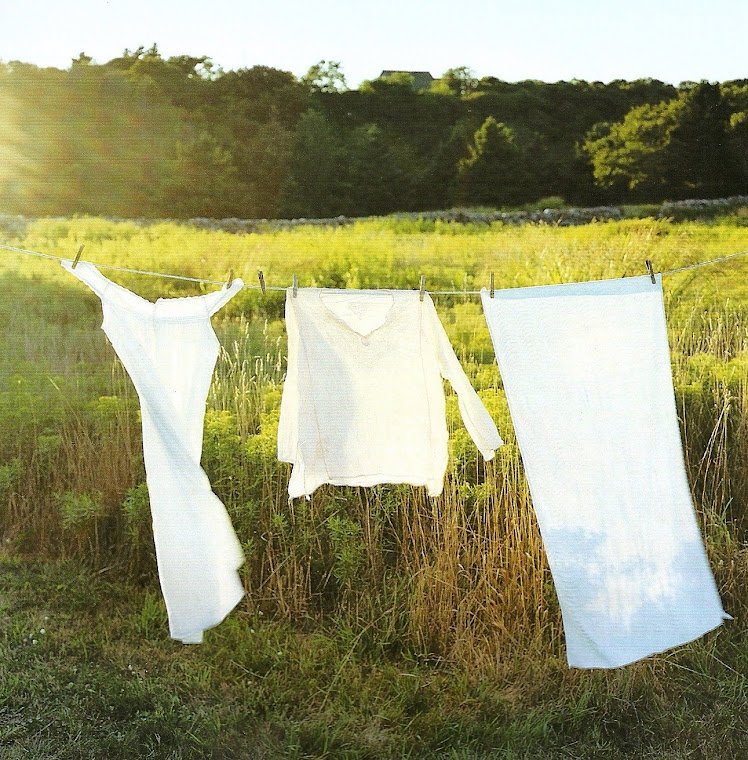 Remember a while ago I said I'll be doing a little renovation in our bathroom?
Well, while the furniture is drying up in the garage and I need a "big guy" to help me put the top part on the floor to continue with the rest, I decided to start a little project for the bathroom, before I loose interest in ruffles!!! What am I saying...I just love them so much! They are delicate, simple to make and at the end always give a nice touch to the fabric. Even a plain t-shirt will look nice! Hum...I might have to do that soon.
As the shower curtain was plain white and I think needed something to bring up the charm (I would love to buy one I saw at Anthropologie, but to expensive for my budget!) and I bought 5 m of white cotton fabric on sale last week($4.5 per meter with 40% off), I said to myself I should give it a try to do ruffles at the bottom of the curtain. Even though ruffles are simple to make, these gave me a bit of a headache, since I had to pull the tread from 5m of fabric!!!!! I cut the strips straight from the top of the fabric to the end. Actually, I just make a little pic with the scissors and them rip off the rest of the fabric with my hands. The stripes is about 4cm wide each. The bottom one is a bit bigger. I like to leave as much rustic as possible, and also save me time of doing ham on both sides of the ruffles. I almost gave up, but as the sewing was progressing, I said to myself that now that I've started, let me at least see the result with one ruffle! It was looking to good to not continue...I still have one more strip to sew and pull the tread to attach to the curtain, but I found two columns of ruffles looks really nice, instead of three. The good thing is, if I want to sew more I can sew and add to the curtain later.
Our bathroom is basically light green and I'm about to paint the walls pure white. What do you think? Should I leave it green or go for white? I would love to hear from you! 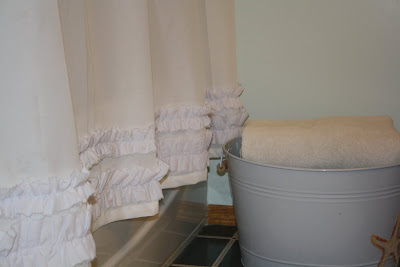 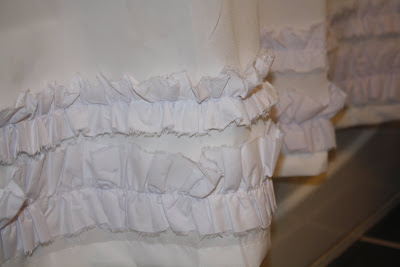 I sew 2 rows of the ruffles. Do you think 3 would be better? 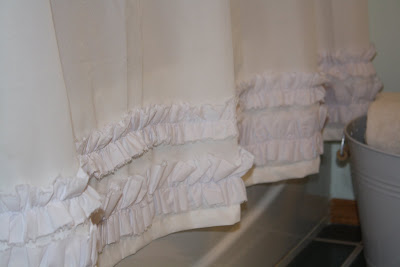 The green paint is almost unnoticeable because of the light from outside, but it's green, believe me! 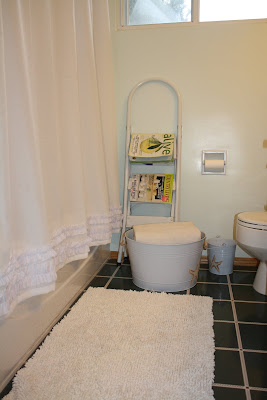 Can you see the green walls? 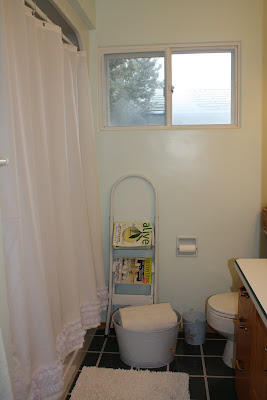 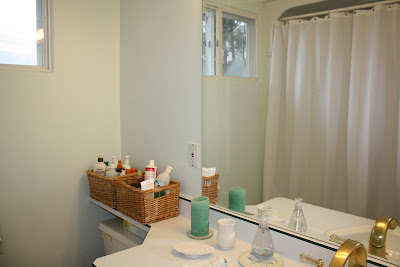 Well Ladies, thanks for stopping by and I hope you like the shower curtain. I'll see you very soon.
Li
Posted by Creamy White at 4:09 PM

White! White! White! It will contrast nicely with the floors..BTW I thought that you bought that shower curtain from anthropology..Looks so perfect! Cute bathroom..~lulu

I say paint the walls white and sew another line of ruffle. I happen to have the Anthro shower curtain (got it 60% off 2 years ago ) but I wish I had just sewed my own. Yours look great!!!

Hi Li! I love your shower curtain!!! I think if you add one more ruffle it will make a bolder look. If you want it to look more delicate, I would keep it as it is.....I am all about "white" so my vote is to paint the walls!!!! LOVE, LOVE, LOVE all that you have been doing!
Health and happiness,
Angela
http://angelawalkerjewelry.blogspot.com/

Li, this is just gorgeous! I say one more row of ruffles and paint your walls white:) Such a beautiful job on the shower curtain. Wishing you a lovely weekend ~ Tina x

i love the shower curtain...i feel that more is more with ruffles, so go for another row!! looks awesome!! and white walls would be perfect! i'm sure you will be happy with the result.

would you mind telling me...how do you make a ruffle anyway????

Hi Li, I love, love, love your shower curtain, so cute! I agree with the rest...one more ruffle...paint the walls white...the room will look amazing! And you are amazing, project after project, do you ever rest?

sweet friend! Thank you for sharing so much beauty from your artist spirit! Keep following your dream painting a world with peace and love! The:)

Megandvd@Beauty in the Attempt said...

I am with the others, white walls and another ruffle. What a great job on the curtain. I have a white shower curtain that could use some ruffles....
Ness xx 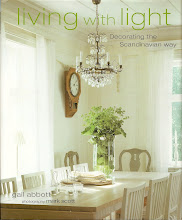